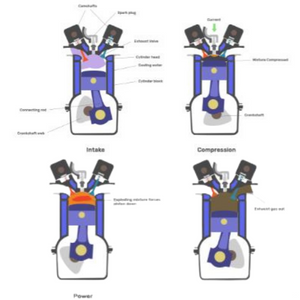 Step 1: Fuel (petrol) and air are added in the cylinder and mixed.

Step 2: The mixture of petrol and air is compressed by the crankshaft.

Step 3: Sparks are used in the mixture to ignite it and the mixture forces the piston down.

Step 4: Gasses go out from the exhaust valve. 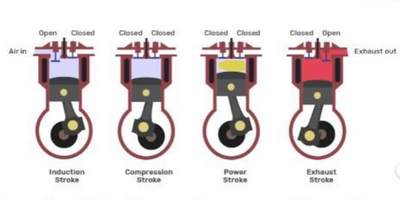 Step 1: Induction Stroke – Piston of the engine goes down and air comes into the cylinder.

Step 2: Compression Stroke – Piston goes up and compresses the air, now the air is getting hot.

Step 3: Power Stroke – The fuel is added in the cylinder.

Step 4: Exhaust Stroke – Fuel starts burning due to ignition temperature provided by the hot air gasses/smoke go out from the exhaust valve.

DIFFERENCES BETWEEN PETROL AND DIESEL ENGINES

WHAT HAPPENS WHEN YOU PUT THE WRONG FUEL IN YOUR VEHICLE?

What happens when you put petrol in a diesel engine?

As well as powering the car, diesel acts as a lubrication oil that keeps the fuel pump and other components running smoothly. Petrol, acting as a solvent when mixed with diesel, has the opposite effect.

Adding petrol to a diesel engine increases friction between parts, causing damage to the fuel lines and pump. Diesel is meant to self-light and therefore do not have spark plugs like petrol engines. Therefore, if you put the wrong type in and start the engine, it can cause damage to the fuel injector and other parts of the engine. If you drive away or even start the car with petrol in the mix, you could cause expensive damage to the engine.

What happens when you put diesel in a petrol engine?

Luckily, putting diesel in a petrol engine isn’t as bad as the other way around. Petrol is made of a mixture that is designed to be stable and not set fire to itself – instead, the engine has a spark plug that sets fire to the petrol in order to start the car. Because diesel needs to be compressed before it’ll ignite, chances are you won’t even be able to start the engine.

You put in the wrong fuel, what do you do now?

Whether you’ve added diesel instead of petrol, or vice versa, to your car, there’s still time to avoid a huge repair bill. The best thing is to switch the vehicle off and have it towed to a workshop. You should avoid driving the vehicle. The longer the vehicle is driven, the higher the level of damage. At a workshop they should be able to drain, flush and refuel your vehicle.

Which vehicle components are harmed by driving with the wrong type of fuel for your vehicle?

Depending on the contamination ratio, you can receive different levels of damage.

Typically, if you have a diesel contamination in a petrol vehicle:
• No permanent damage to major components.
• You will need to drain and flush the whole fuel system.
• Replace fuel filter.
• In extreme cases, drain engine oil and replace oil and oil filter.

Typically, if you have petrol contamination in a diesel vehicle:

Here at VAG Spec Centre we do replacement of damaged engine parts and complete engine overhauls. Trust your Audi and Volkswagen Specialists to help and to determine the best and fastest route to get you back on the road!

WhatsApp Chat is free, download and try it now here!